IMPROVAC® is a vaccine that works with the pig’s immune system. 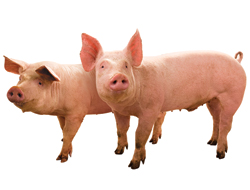 Below you will find further detail on the technical information:

An explanation of the two-dose administration of IMPROVAC demonstrates the ease of use of this product: 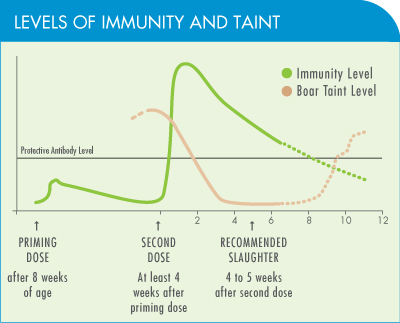 How to administer IMPROVAC

Two 2 mL subcutaneous injections are given at the base of the ear: 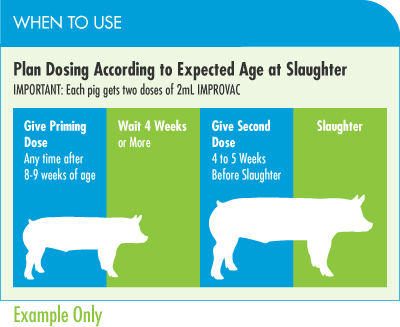 An important aspect in measuring the efficacy of IMPROVAC is evaluating where a sample falls on a sensory threshold matrix. Sensory threshold is the level above which carcasses are considered to be tainted. These levels can vary, but to be commercially useful they must accurately distinguish tainted from untainted carcasses.4 Proposed threshold values range from 0.5 to 1.0 μg/g for androstenone and 0.20 to 0.25 μg/g for skatole.

Studies show that up to 3% of physical castrates have boar taint levels above the sensory thresholds. This illustrates that current techniques, such as castration, are less than 100% effective.5

In IMPROVAC-related studies such as the following one from New Zealand and Australia, nearly half of 369 boars (100–105 kg) exhibited boar taint, with androstenone and/or skatole in fat tissue above sensory thresholds. 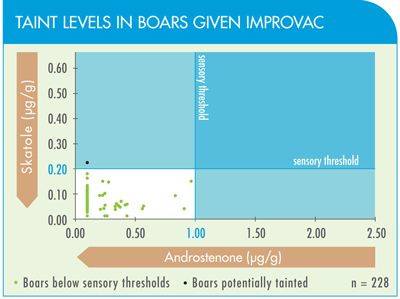 “We’ve done many, many trials throughout the world with IMPROVAC and irrespective of where they were done in the world and how big the studies were, the data sets all said the same thing: this product is as efficacious at controlling boar taint as surgical castration.”
—John Crane

Prior to the second vaccination, boars vaccinated with IMPROVAC benefit from the natural anabolic growth factors present in intact males. 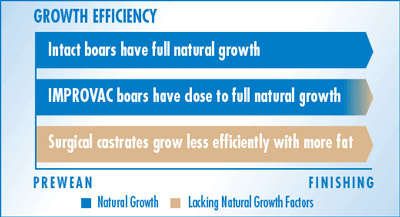 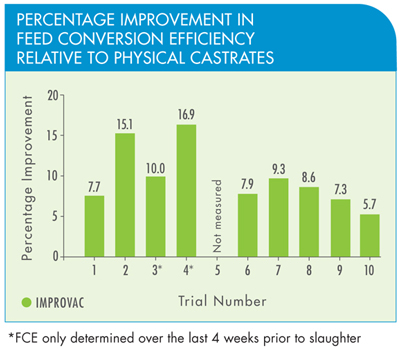 In every study where these parameters were measured, boars consistently and significantly demonstrated: 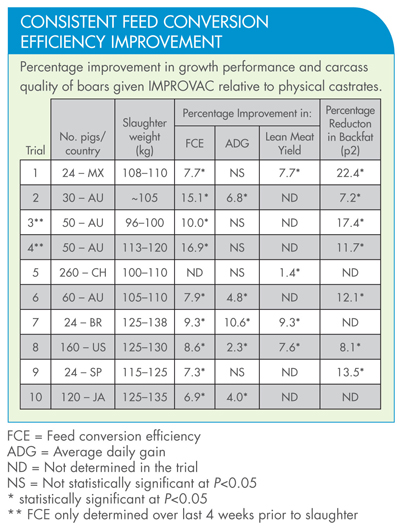 As the above table illustrates, feed conversion efficiency is consistently improved. This has been proven time and again in numerous studies across the globe.3

One study conducted in Germany showed a feed conversion improvement of 9.9% over physically castrated pigs. Pigs were either physically castrated following standard protocols and timing or were vaccinated with IMPROVAC at 11–12 and 20–21 weeks of age. The study was conducted on a commercial research farm, representative of the pig industry in southern Germany. Note particularly the 1.9% significant improvement in lean meat yield and the 9.9% significant reduction in backfat.

IMPROVAC – on the cutting edge of quality

Boars vaccinated with IMPROVAC produce pork with eating qualities at least equal to that produced from physically castrated pigs and gilts.

The following photos are from studies in Asia and have been chosen for illustration purposes. While the appearance is not representative of genetics and/or diets in other regions, the carcass changes in leaner breeds are qualitatively similar.

Visible efficacy, on farm and at finishing

Within 2 weeks of the second dose, testicular production of testosterone has declined by 90% or more.2,3,9

How? Improved feed efficiency (approx 8–10%) means that boars given IMPROVAC will produce approximately 8–10% less manure annually compared to physical castrates, which means producers have to dispose of less waste. This is good for the environment because it can decrease the carbon footprint of pig production by reducing green house gas production and reducing the amount of nitrogen and phosphorus in manure.

Why do the boars produce less waste?
Because they consume less feed overall. Decreased feed not only saves the producer money, but it may also provide an environmental benefit.

Pork from boars vaccinated with IMPROVAC is completely safe for human consumption.